On November 8, 2017, the Office of the Comptroller received nearly $6.5 billion in proceeds from the state's October General Obligation bond sale. State law required the bond proceeds to pay only vouchers incurred by the state prior to July 1, 2017, to help reduce the state's unpaid bill backlog, which neared $16.7 billion the morning of November 8.

Below you can see the amount of fiscal year 2017 and fiscal year 2018 medical bills and unpaid state health insurance claims at the Office of the Comptroller prior to the release of bond proceeds, and how the Office of the Comptroller used bond proceeds to cut the backlog of these bills. This chart reflects the period of when bond proceeds were received November 8 until the last bond-related federal reimbursement for medical payments was received November 27. 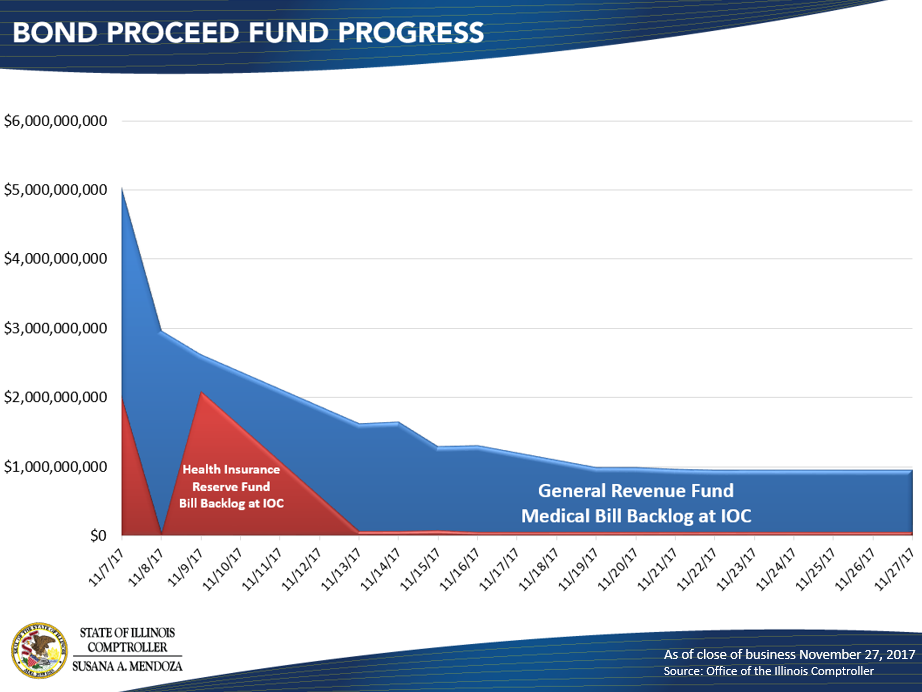 How Your Money is Being Spent

On the morning of November 8, 2017, worsened by an impasse that left the state without a complete budget for two years, Illinois’ unpaid bill backlog stood at a record $16.7 billion.

The same morning, the state received nearly $6.5 billion in proceeds from an October issuance of General Obligation bonds to pay down a significant portion of the backlog.

Fiscal impact of nearly $6.5 billion in bond proceeds: $8.8 billion in bills paid in only three weeks.

For more information on how your money was spent, click here.